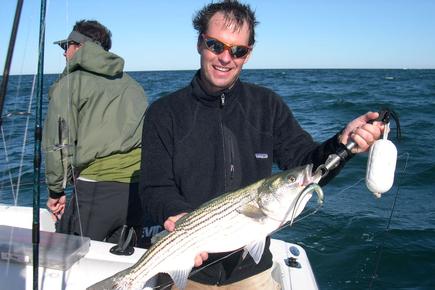 Little Rhody Charters will be primarily fishing in Narragansett Bay from early May until the Bass bite slows down sometime in late June. We may also be making occasional runs to the Salt Ponds to fish the Worm hatchs. We'll be looking for Silversides, Herring, Mantis Shrimp, and Mummichugs which will be the primary baits in the Bay. Once the water temps come up a few degrees in Mid May we should also start to see large schools of adult Menhaden enter the Bay as well as other larger baits like Spearing, Squid and Alewives exiting the estuaries. Every season we also run into crab hatches in the bay that are just plain fun and it can be much like trout fishing. I also like to be flexible and on the right day's I may head off towards Cuttyhunk & the Islands, Cape Cod Bay or make my annual pilgrimage to the Joppa Flats in early June. This part of the season can be prime time for big fish on the fly as well as offering up some exciting top water action.

Most seasons I run the boat until as late as early November, when most anglers have called it quits for the season in favor of hunting, making plugs or tying flies.

This time of the year always has a lot to offer, but you often have to cover some water to find the real action. I am often running to Block Island for Bass & Blues with the added bonus of running in to early arrivals of Atlantic Bonito. These fast little critters are a blast on light tackle, they can be finicky but once you figure them out it's "Game On"! Other times I'm fishing in front of Newport or Narragansett looking for top water action, there's nothing like a big bass exploding on your top water bait, NOTHING! Some years we might even run into early arrivals of False Albacore. And as July turns to August, it becomes a real possibility to be lucky enough to put a Grand Slam in the boat on any given day. 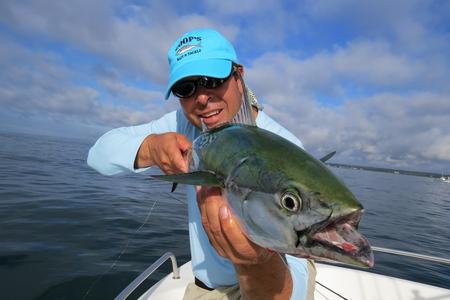 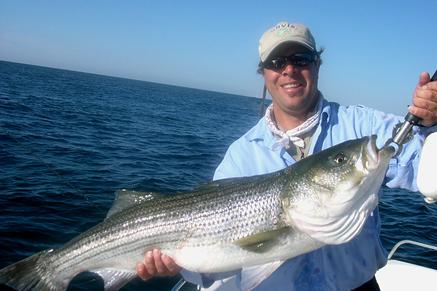 The Rhode Island Shoreline will soon start to see signs of life, typically it starts with small Stripers being caught along the Newport Beaches and down at the West Wall in Narragansett. These fish will all be fresh fish with the tell tale Sea Lice hitch hikers on them. Once the water temps reach around 47 degrees we will see an increase in activity starting off the season. I generally start to wade fish around the third week of April in search of Stripers in Diapers. I'll hit tidal rivers and back bays with small flys and small paddle tail plastics. Around this time I also start to put the finishing touches on the boat and gear in preparation for the first splash of the season. I usually splash the boat around the last week in April to go on scouting missions in Narragansett Bay looking for signs of life.

As a rule, Stripers start to arrive in decent numbers by the second week in May as water temps start to reach the middle 50's. Around this time larger fish start to move in and we will be looking for Herring and Silversides. Stripers will occasionally be active on the surface feeding on silversides or at the mouths of tidle rivers picking off shrimp and crabs. Normally we are fishing Rhody Flatwing's, Deceiver's, Clouser's and Half-n-Half's on 8-10 weight's depending on fishing conditions. We will also be using Soft Plastic's like Storm Shads, Slug-Go's and Zoom Super Flukes as well as a variety of jig's and plugs such as Swimmers, Poppers and Spook's. Occasionally we may need to deploy the larger 9" Plastic's to dredge up the

Big Girls from down below.

Things really start to change towards the end of August. Most seasons we see an influx of Anchovies and Peanut Bunker accompanied by hungry Bonito, False Albacore and Bluefish. This is one of my favorite times of the year as we transition from primarily fishing for Bass and Blues around structure, to chasing hard tails ripping through balls of bait!

As the Summer fades and turns to Fall, the real action begins in the way of southern migration. As the water temps drop, the bait starts to filter out of the bays and estuaries and begins it's migration along the shoreline heading south for the winter. Guess who's waiting for the dinner bell to ring, you've got it, Mr. Bass and his buddies.They need to fatten up for their journey south and that means loads of action for anglers. This action can go on until the water temps get as low as 47 degrees, which in generally around the first week of December. 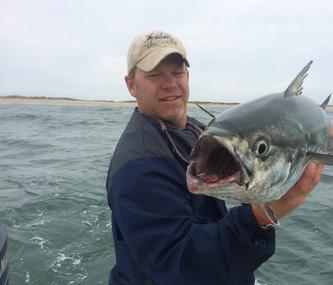 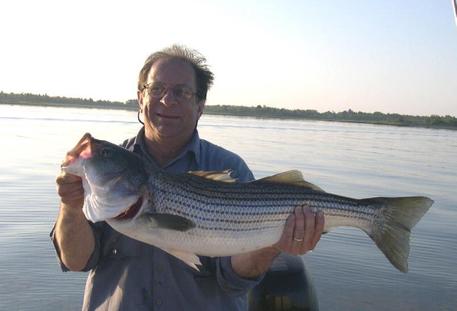 As Narragansett Bay gets warmer slows down, I start turning my attention towards Newport and Block Island.  Newport offers easy access to excellent structure fishing, and we all know that big Stripers just love structure!  Big flies, soft plastics and surface plugs are just the ticket for big Bass and Blues cruising the rocks.

Block Island also starts to heat up with big Bass and Blues and most trips end with tired, happy anglers. I launch out of Point Judith on the right days and its about a 25 minute boat ride to the fishing grounds. Sand Eels and Squid can be abundant so the Fly Rod can rule! Big flies and large plugs are often the ticket to hooking a quality Bass. "The Block" has been offering up some real quality bass over the last few seasons. 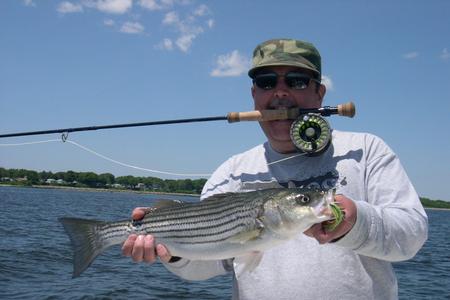